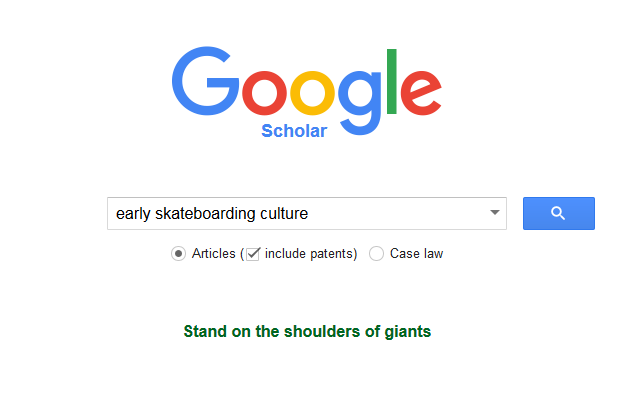 I used Google Scholar to research, as it is a more academic research tool than plain google or bing; therefore I am able to find more relevant information online, as it filters out a lot of non relevant and non academic information.

We were tasked with creating a mind map with the general knowledge we, in our groups, had about skateboarding without doing any exterior research. I was surprised as to how much information we were able to conjure up once we all put our minds to it. We realised that skateboarding isn’t just the sport but a major influence on culture in Film, Print, TV, Gaming and even the Olympics.

“Look at any streetwear brand or personality today. Whether they picked up on 5-panel hats, camo-print pants, or fly sneakers, there’s a good chance their style was influenced by East Coast skaters of the ‘90s and early 2000s.” (Welty, 2013)

The culture of skateboarding in the 90s was a major influence on the streetwear fashion scene. An early adopting brand like Supreme opened it’s doors in New York City 1994; over the next 20 years Supreme would keep to it’s traditional values and not sell out to non-skating, non-streetwear audiences like other brands have; for instance Vans and DC.

These skate fashion brands have grown exponentially since their inception with Vans posting annual sales figures of over $2 billion. (Connelly, 2015)

Perhaps the most famous piece of music featuring skateboarding culture is Avril Lavigne’s “sk8er boi”peaking at number 8 on the UK charts and 10 on the US top 100 (Official Charts, 2017). The genres of pop punk and punk rock heavily featured skateboarding in both their lyrics and music videos.

Some examples of skateboarding in music videos are:

Iconic 90’s pop punk/ punk rock band Sum 41 heavily feature skateboarding in this music video and the majority of the location of the video is set in a skate park.

Another example is Lupe Fiasco’s Kick Push which follows the story of a young boy and his love of skateboarding.

The origin of skateboarding

The original invention of the skateboard is widely debated; however it’s relatively commonly accepted that surfers on the west coast originally concocted the idea. The Skateboarding Magazine says “Surfers in California get the bright idea to surf concrete and invent Skateboarding. The origin of the first skateboard has never been proven as it seems to have been the spontaneous invention of multiple people. Wooden boards with roller skate wheels slapped on the bottom where the makings of the original boards”

Here is an infographic of the evolution of skateboards:

One thought on “Skateboarding Research”